Another two months no update, high time to skim through the recent subversion commits (loads of commits) and cover some of the more interesting changes in this "blog":

Shortly after the previous entry, I finished my experimental implementation of Screen Space Ambient Occlusion. Blurring the occlusion buffer turned out to be quite harder than expected, as the random noise generated by the ambient occlusion algorithm turned into nasty cloggy artifacts the moment I tried applying some gaussian blur. After lots of experimenting, I ended up using a 12-sample poisson disc to blur the occlusion buffer, which resulted in an ok-ish image with some barely noticable smooth random patterns left. Finally, I combined the occlusion buffer with the original scene: 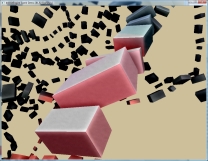 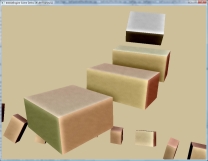 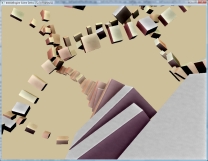 Besides doing lots of architectural reorganization and refactoring, I also started to implement shadow mapping. Up to now, directional light (sun) shadows are the only shadows available, as high-quality long-range shadows seemed the most demanding to me, clearing the way for other light types' shadows as well. The current implementation uses a technique known as PSSM (parallel-split shadow maps), orthographically rendering the scene to one of three different shadow splits, depending on the viewer's distance (visualized on the left screenshot). Filtering & softness still missing: 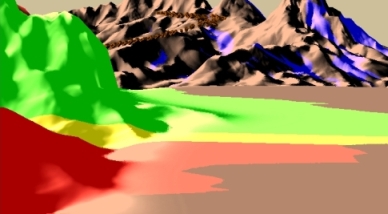 Yet, by far the largest number of commits throughout these last two months were dedicated to the API. These changes include both generalization (e.g. to make lights available in processing effects) and simplification (making overly nested methods more accessible). Lots of classes were renamed according to their final responsibilities, making the API much more understandable and intuitive. Although there are still some methods missing, the basic class hierarchy may now be considered close to final.