Looks like the 'blog-style' thing did not work out, at least not for the past few weeks. Anyways, I've been busy with a lot of things, some of which I am going to report in this entry.

First thing, I reinstalled subversion as I was once again fed up with all those hacky *.*_ and *.*__ backup file names. (Yes, I did work without any version control since I moved to Vista, due to laziness I guess, although it could have saved me some trouble). After some nasty fiddling around with apache and its modules, I finally got it working again and I'm really pleased with this new comfort.

Afterwards, having all the freedom of messing around with my code without breaking anything, I did some testing on the efficient rendering of landscape, which resulted in a first prototype of a hierarchical patch-based level of detail approach, theoretically allowing for infinite tesselation, as always strongly bonded by memory constraints. This approach basically works like a quadtree, splitting the landscape into four patches, again being split into four patches, and so on. Every patch uses the same vertex and index data, allowing for extremely memory efficient rendering. The height data is read from texture, which sadly limits this approach to Shader Model 3.0 hardware. I did some testing on reading the height data from texture on-the-fly, interleaving it into the vertex data using vertex streams on Shader Model 2.0 hardware. Updating heights only when necessesary, this did indeed work out. Yet, naturally, it greatly increased the number of vertex buffers, requiring a lot more VRAM. I ended up using a pool of vertex buffers shared among all patches, acquired and released according to the patches' current level of detail and visiblity. 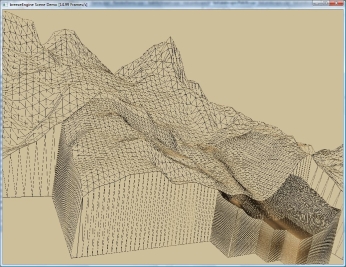 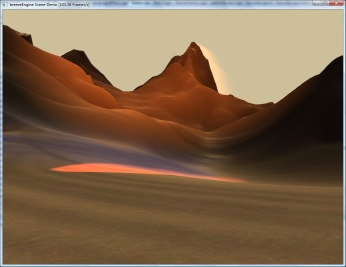 Some early stage of my landscape implementation can also be seen on the last screen shot featuring god rays on the breezeEngine project page. More images to follow soon, including my early experiences with Screen Space Ambient Occlusion.

Besides, I am still working on the rendering pipeline, currently introducing simulation-wide scene management, perspectives and lots of other stuff. The post-processing framework is more or less complete, there has been a lot of reworking since the last entry, opening up lots of new possibilities such as mixing of forward and deferred rendering, pre-processing, shader-controlled temporary and permanent render targets etc., which I am also going to describe in one of the next entries.