Today's entry will focus on the key features of the engine's now close-to-final rendering pipeline. Throughout the last months, the rendering pipeline has grown a lot - in fact, it has by far outgrown my original plans.

My original intention was to implement a simple class taking over the management of scene elements that would frequently be required throughout the whole rendering process of a scene. This concept included collections of lights, renderables and perspectives, a central interface providing all the information needed to render a typical 3D object. The concept worked out pretty well. Soon, I had my first lit objects on screen, which can still be seen on the breezEngine project page.

Following this rather basic functionality, I started implementing a post-processing framework. This processing pipeline basically consisted of a list of processing effects being applied to the fully drawn scene, one after the other. The processing pipeline also provided depth, scene and screen targets any effect could write to and read from. In addition, it implemented the swapping mechanism necessary to allow for chaining of several effects. Of course, I also ran into the mysterious pixel shifting issues that almost certainly occur whenever people start implementing post-processing for the first time. Fortunately, there is this great article by Simon Brown on the net, explaining all about these issues.

Next thing, I introduced intermediate render targets into the processing pipeline, enabling shaders to define additional textures of arbitrary dimensions to write their temporary output to, allowing for blurring and downsampling without any need for additional engine code. The result of these efforts can also be seen on the breezeEngine project page as well as in the second entry below this one.

Afterwards, I realized that the concept of intermediate texture targets had even more potential than the actual implementation made use of. The basic idea was to generalize the possibility of defining additional render targets for all effects, moreover introducing the possibility to share these intermediate target textures among all effects. This led to the distinction between "temporary" and "permanent" render targets, the former only existing throughout the execution of the corresponding shader code, the latter existing throughout the rendering process of the whole scene. With this functionality implemented, it is not only possible to add pre-processing effects preparing scene-wide textures such as ambient occlusion, but it is also possible to change the whole process of rendering. For example, by introducing additional render targets, it is now possible to also render positions, normals and material IDs, allowing for the implementation of deferred shading only by changing shader code. In the end, I even removed all of the predefined render targets except for the depth buffers (and the back buffer, naturally), which led to a pretty neat design. 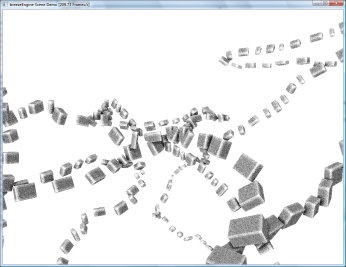 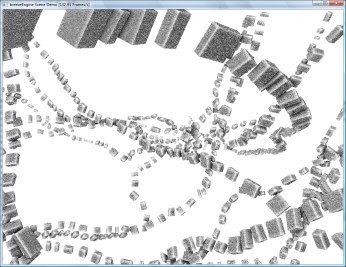 I might also cover some of the theory behind this technique in another entry.